The Megaman series is great, while I’m not a fan of the Classic or ZX series I do very much enjoy the Battle Network Series, these games were very fun and fast paced. Then came the Starforce series an offshoot of the Battle Network games, still in the same series but telling a different story. Starforce Leo was my first Megaman game on the DS it was very different from Battle Networks 3 and 4 but still very enjoyable. Because my old DS crapped out on me though I haven’t been able to follow the series, so I had no idea two more games were released after the first one.

Megaman Starforce 3 was developed by Capcom and published by Capcom. It was released on June 30th 2009. 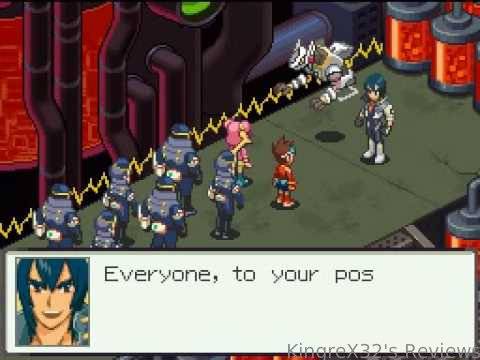 With the introduction of Wizards human beings now have life a little bit easier, unfortunately scientist find out that Wizards are emitting a large amount of Noise Waves that are causing problems in the Wave World. Even worst some Wizards have completely lost control of themselves and have gone crazy due to the noise, now its up to Megaman to find a way to defeat these rampaging Wizards and find out the mysterious benefactor behind this.

Starforce 3 is very similar to its predecessor in that many features from the previous games return, features like the Brother band, the ability to Counter attacks and Galaxy Advances (like Program Advances from the Battle Network Series). This time around you can hold more brothers, and they give you link power allowing you to equip more abilities for Megaman. Link power is important because to equip certain abilities you need to have enough link power. Think of it like the Navi Cust from Battle Network 3. 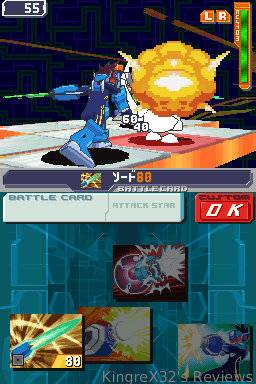 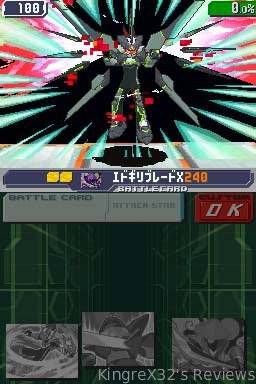 Abilities include Fast Shield (a shield appears around megaman at the beginning of a battle, Air Shoes (allows megaman to walk on broken panels) HP +100 and various others. The Main new feature of the game is Noise. After a certain point in the game you will receive an upgrade that will allow you to absorb Noise. When you absorb enough Megaman will change (like Style Changes from BN3) into one of 10 transformations, each one a different element with both hat elements Strength and weakness.

Graphics wise Starforce 3 looks almost unchanged from the first game. It’s not really a bad thing but after all these years you’d think there would be some improvement. Gameplay wise nothing much has changed, the game feels just as easy as the first game and plays almost exactly like the first. Control wise again nothing has changed. 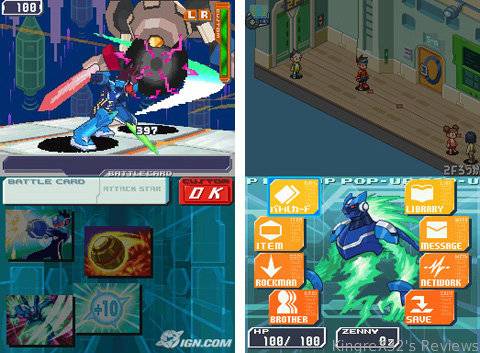 As fun as the game was to play my main issue with it is that it feels too much like the previous games. Barely anything has changed and it’s starting to feel like the same thing over and over. I’m still a fan of the Megaman Battle Network series but I feel that some things need to change for it to stay up-to-date. Nonetheless if you’re a fan of these games give this one a try. Megaman Starforce 3 gets 7.6 out of 10. 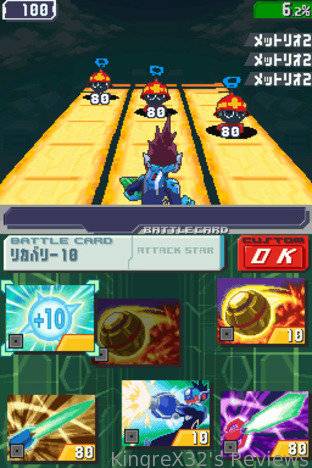 Re: Megaman Starforce 3: Black Ace: Review by KingreX32
on August 19th 2012, 1:30 pmAmufungal
It has been a longtime since your last review
Welcome back as a reviewer

Re: Megaman Starforce 3: Black Ace: Review by KingreX32
on August 21st 2012, 8:52 amTowafan7
This looks similar to the Battle Network games for the GBA.

Re: Megaman Starforce 3: Black Ace: Review by KingreX32
on August 22nd 2012, 7:05 pmKingreX32
they are exactly like the Battle Network games. Dude I was so Awesome at Battle Network 3 white version of the gameboy.

Re: Megaman Starforce 3: Black Ace: Review by KingreX32
on August 30th 2012, 1:09 pmMetalShyGuy
I'm not a fan of the Battle Network games, but I did like this one for some reason.

Re: Megaman Starforce 3: Black Ace: Review by KingreX32
on September 4th 2013, 3:10 pmDigiDestined
The Megaman Starforce series was a good spinoff series, but it didn't reach the level of greatness that the Megaman X series had reached in its heyday. =)

@Anime_Gurl wrote:What a splendid review. I enjoyed this game immensely after it released! ^.^

I loved playing this game too!