Mario’s first 3DS entry is a must-have for every 3DS owner!

That rotten Koopa Troop is at it again! After a particularly stormy night, Mario finds that the Tail Tree’s leaves are all missing, but he soon finds a 3D photograph nearby depicting Princess Peach being kidnapped by Bowser! In a mad dash, Mario starts to race towards the Koopa Kingdom to rescue his friend from the clutches of the evil tyrant. Bowser has a new trick up his sleeve, however, as he is using the Super Leaves to power up his troops! Can Mario reach Bowser’s Castle and defeat the evil turtle once and for all? 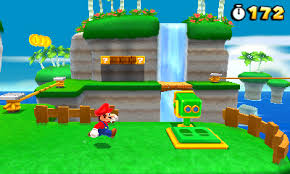 The gameplay in Super Mario 3D Land is similar to previous titles in the series, but there are some innovative new twists and fun surprises which keep the formula fresh and exciting even in repeat plays. Pressing the B Button allows Mario to perform his signature jump, and holding the Y Button allows him to run. Mario seems to have forgotten how to triple jump, but with a running start he can make a great leap through the air. Some classic abilities return from past titles, such as the wall kick, side somersault and ground pound. Pressing and holding the L or R Button causes Mario to crouch. If you move while crouching, you can crawl through otherwise-tight crevices, and if you hold the button long enough, Mario will begin to shake. Pressing the B Button at this time will allow him to perform a super-high crouch jump, perfect for reaching cliffs or platforms just beyond the reach of a regular jump. Controls are fluid and responsive, making them feel very natural and absorbing you into the action.

Like most Mario games, a plethora of power-ups is available for you to use in your quest to rescue Peach. The classic Fire Flower returns from past titles, allowing Mario to throw scorching-hot fireballs to singe Goombas, Piranha Plants and various other nasties; along with the Super Star, which turns Mario invincible for a short time. Joining them are new power-ups, the Boomerang Flower and Propeller Block. The Boomerang Flower gives Mario the helmet and shell of a Boomerang Bro, and it allows him to throw boomerangs which not only strike enemies and turn them into coins, but allow him to collect items beyond his reach as they make contact. For the adventurous, Mario can throw a boomerang and, as it comes back, jump onto it for an added boost in jumping height, thus allowing him to reach items floating in the air with relative ease. True to its name, the Propeller Block encases Mario inside a block with a propeller on its top. Pressing the B Button twice will cause Mario to propel upwards into the air, and holding the B Button while in mid-air allows him to float slowly to the ground. You are still able to control Mario while descending, allowing him to reach far-away platforms. 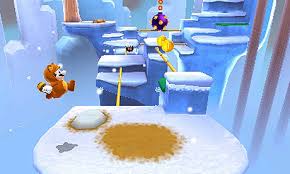 Quite possibly the most exciting addition to the line-up of items is the Super Leaf, returning from the classic game Super Mario Bros. 3 (NES; Game Boy Advance). When Mario makes contact with it, he becomes Tanooki Mario, wearing a suit which makes him resemble the Japanese animal, though with a raccoon’s tail. Pressing and holding the B Button will cause Mario to kick his legs and swing his tail, allowing him to significantly extend the length of his jump. Due to the nature of this particular entry, Mario is unable to fly while in Tanooki form. It’s disappointing but understandable, as the power of flight would allow the player to skip vast sections of each stage, and thus make the game a tad too easy. If Mario loses five times within the same stage, the player has the option of using the Invincibility Leaf, located in a block at the start and checkpoint of that stage. Using the Invincibility Leaf will turn Mario into White Tanooki Mario, allowing him to become invincible and take no damage from enemies or obstacles. He will still lose if he falls off the stage or into a pit, however. If a player loses a total of ten times within the same stage, they may use the P-Wing, which will instantly warp them to the goalpost at the end of the stage. It’s commendable that Nintendo has added this safety net to the game for younger or inexperienced gamers, making it accessible for just about everybody.

The game features a whopping 96 stages, ranging from open plains and underground caverns to desert ruins and even a stage made entirely of cookies and other tasty treats. Exploration is a subtle blend of elements from both the 2D and 3D games in the series. While players can explore the levels in virtually any direction like in the 3D games, they must progress through each stage in a similar manner to the 2D games, namely trekking from Point A to Point B. Within each stage are hidden three Star Medals, which are necessary to unlock certain stages. In early levels they can be found easily, but they are typically well-hidden later in the game, meaning it’ll take a bit of technique and cunning to successfully locate and collect each and every one. At the end of each stage is a goalpost, and the higher you land on it the greater the reward, ranging between 1 and 10 coins. If you reach the very top, you earn a 1-Up. Travel between stages is simpler than other Mario games. Each world is a straight line, with access to the next stage earned by completing the current one. Once Mario clears a castle or airship, he travels to the next world. The player is treated to a small, humorous cut-scene before each new world, complete with a new 3D picture to view. The pictures are viewable in an album inside the blue Toad House in World 3. Other objects on the world map which players may enter include Toad Houses, in which they may find a useful power-up; and Mystery Boxes, compact stages with a ten-second time limit in which the player may earn a Star Medal. Cleared Mystery Boxes may be exchanged with other players via StreetPass, meaning that there is a light multiplayer aspect within the game to enjoy.

The graphics in Super Mario 3D Land are vibrant and colourful. The 3D effect is deep without becoming eye-watering, and allows for some added depth which provides some gameplay tweaks not possible in previous titles. In some stages are located three-dimensional puzzles, brain-benders presented in an isometric fashion. With the 3D effect turned on, it is easy to see the depth required to navigate the puzzle and collect the reward. Nintendo understands that not everybody likes or is able to use 3D, so you will also find a yellow eye panel in each puzzle room. Standing on it shifts the viewpoint, allowing the puzzle to be solvable even without 3D. There are other elements of the gameplay which look amazing in 3D, and in some cases it’s hard to go back to 2D once you’ve tried it.

Super Mario 3D Land is the perfect 3D Mario platformer for any 3DS owner. With stunning graphics, fun gameplay, and plenty to do, it’ll be hard to put down your 3DS for weeks. Just remember to take breaks every 30 minutes!

Story: 10
It’s not much different from other Mario titles, but it works well for this installment.

Gameplay: 10
So much fun you’ll be playing for weeks, with the main game taking a while to finish.

Graphics: 10
Amazing to behold, allowing for gameplay tweaks like none before.

***
Chromaicora Adventures - "It starts with a Zed..."
The next season block starts very soon! See all-new episodes every Monday, Wednesday and Friday!
Similar topics
Similar topics
Share this post on:

Re: Review: Super Mario 3D Land (3DS Retail)
on August 16th 2012, 7:40 pmKokorOtaku
Great review zack I still haven't unlocked the secret world even though I beat every level with both characters and got every flag pole gold?? I'm confused

Now that your staff you have access to the staff part of the forums. When posting pictures to your reviews upload them to Wiiwarewaves Photobucket account.

We need to host our own pictures.

Thank you for all the kind words, everybody!

OtakuWiiU, It's not a secret world, just a secret stage. It should be the to the left of S8-1 and be titled Special-(Crown)

Re: Review: Super Mario 3D Land (3DS Retail)
on August 17th 2012, 7:27 amKokorOtaku
Ok I found out the problem... Even after seeing if I missed a world 5 times I still managed to forget a flag pole but now I've got it and beat it

Re: Review: Super Mario 3D Land (3DS Retail)
on August 17th 2012, 4:11 pmGeekyGamerJack
Thank you so much, everybody! It really encourages me to do my best!

Re: Review: Super Mario 3D Land (3DS Retail)
on August 18th 2012, 5:55 pmClαππαd
This review is beautiful, have you reviewed games at other websites before?

Re: Review: Super Mario 3D Land (3DS Retail)
on August 18th 2012, 6:51 pmGeekyGamerJack
That's right, but I've always been skilled with writing. It's one of my natural talents.

Re: Review: Super Mario 3D Land (3DS Retail)
on August 20th 2012, 10:43 amFuManchu
I remember those reviews! I was looking forward to more, but you never reviewed anymore, until now.

Let's not forget the introduction of Kitsoone Luigi.

Re: Review: Super Mario 3D Land (3DS Retail)
Sponsored content
Permissions in this forum:
You cannot reply to topics in this forum