Frogger gets Hyper at 30 - Is it a return to greatness or time he croaked? 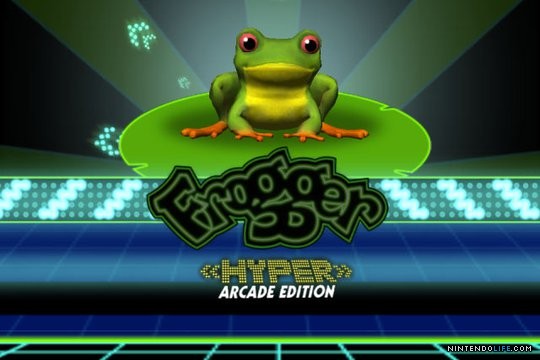 One time arcade rivals to Mario, Frogger and Pac-Man lost their way once they made the move to 3D environments.  Both series had multiple 3D outings last gen to middling reviews and sales, but this generation they've reverted to their original 2D gameplay.  Pac-man found new revelance in Pac-Man: Championship Edition (which regretably never made it's way to Wiiware).  Now Frogger is following suit with Frogger: Hyper Edition.

Frogger: Hyper Edition takes Frogger right back to his arcade roots and builds from there. It starts with the classic arcade gameplay adds new skins and music, enhanced controls and then various different modes of play, all based off the classic arcade style of play.

Classic Mode: This is a replication of the classic arcade Frogger.  Note for purists: It's not the original! It doesn't look the same nor play the same as the actual arcade edition.  For the most part this is a plus as you can jump onto the end lilypad without needing the same pixel perfect execution and the addition of continous hopping by holding the direction pad is appreciated.  You are also defaulted to more lives than in the arcade. A great added feature (at least the first time playing) is between levels text appears telling you how many points you need for an extra life and what's changed from the previous level (IE: faster cars, less logs, patrol snake now appears).  You might be shocked to grab the lady frog, only to see another appear.  This never happened in the original game but makes sense in some other game modes.  You can only grab one lady frog per trip in Classic Mode. Overall this is a more generous game than you'd remember from the arcade original.
There are three extra 'skins' for Classic Mode - Hyper which gives it a neon 'Tron-like' appearance. Castlevania and Contra skins are unlockable too.

Twin Frog is identical to Classic Mode except now you are controlling two frogs simultaneously.  This certainly adds a new level of difficulty as you have to keep an eye on both frogs and hop them to safety.  The frogs appear beside each other, at varying distance each level, and move simultaneously.  Getting through traffic remains much the same but log hopping takes on new strategies as you have to ensure both frogs are ending up on a log or turtle (usually different ones). This results in a lot of back tracking when two logs (or a large one) aren't available when you need them. If one frog dies, you move to the next life.  You only need to successfully cross twice (filling four of the five lilypads) to advance to the next level. At first I thought this would be an annoying, throw-away side-game but I found myself getting pulled into it, with that 'I almost made it, let me try that again' compulsion.

Paint mode gives you the same traffic gameplay but now with pre-arranged highlighted squares.  You must hop into each square at least once, changing it's colour, without being crushed to finish.  You cannot hop off the highlighted squares either.  This is a fun edition as you are now literally playing in traffic trying to fill every square.

Tile Capture is similar but now multi-player (which can be played singly with 1-3 CPUs) where you are trying to 'capture' or paint the most squares (but without a pre-arranged pattern) .  Once you successfully cross, any squares you've painted with be temporarily 'locked' and cannot be changed by your opponents.  There are also special coloured flies that appear on screen which give you one of three power-ups when you capture them.  By shaking your wiimote you can activate the power-up either: teleporting your opponent to another point on screen; reversing his movements or  freezing him temporarily.  Any of these can be, and usually are instantly lethal once unleased.
This makes for a chaotic but fun mode.

Lady Frog Rescue is another multiplayer mode again based on Classic mode but now with the objective to 'rescue' the most lady frogs as you hop through to the end lilypads.  Lady frogs appear in multiple places in this mode.

Battle Royal is a cross between the previous two where by capturing the lady frog, you become a killing machine and can kill your opponents merely by touching them.  Other opponents have no choice but to run for their lives through traffic and across dangerous ponds until the effect wears off.  There are power-ups which could save your life if you invert the killer frog's controls, freeze or teleport him away.  Playing one on one (or against a single CPU) this can be a fun mode but with four players, it's simply too chaotic to enjoy.

Challenge Mode gives you challenges based on the other modes to complete but with strict limitations such as a tight time limit or needing to collect a certain number of power-ups.  These can be challenging but fun.  You must play through the Challenge mode to unlock the Castlevania skin.

Considering it's based on the arcade original one can't expect too much from the graphics, however, the styling is still a bit of a let-down.  The bloom effects are unnecessary and annoying. The hyper mode with it's neon graphics are fine but the classic mode looks muddled and garish, especially the alligator and fly that appear on the top lily-pads.

Sounds are expectedly retro-ish which is appropriate. The music consists for three funked-up retro tracks which quickly become annoying.  There is no option to forgo music so my TV ended up muted after 30 minutes of play. 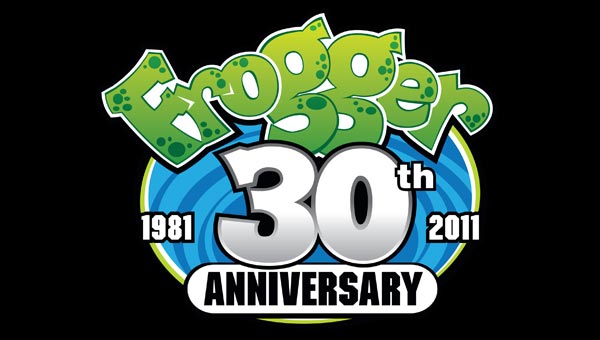 30 years on and the classic Frogger gameplay still holds up well.  The extra modes are a welcome edition, add extra challenge, extent the replay value and allow for multi-player fun but none of the extras will probably keep you coming back for long.

At 700 points, this is a very fair price for this game (considering a VC release of the original arcade version would be the same price without any of the bonus content).  Classic Frogger is still addictive fun and while not all the extra modes may thrill you, you will certainly appreciate the added challenges and multiplayer.

Yes. The angle on the first one was a little ackward, and the new levels weren't all that great.

This one is the classic topdown view, and classic levels but with added skins and gamemodes.