The Aqua Blue 3DS is evolving 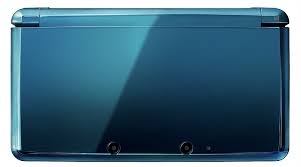 Nintendo 3DS model
As of now, Nintendo of Japan will be the only region to discontinue the Aqua Blue 3DS. This might be the company’s decision to give the consumers one less color scheme to choose from or it might be an early honorary rarity item to one of the two 3DS launch colors. My belief of this reasoning is this:

Nintendo is going to bring the Aqua Blue onto the new 3DS redesign.

3DS redesign mode
I believe that the discontinuing of the Aqua Blue 3DS, even if it isn’t global, hints the possibility of an eventual launch of the 3DS redesign. I believe it because I think that the two versions of the 3DS when “closed” are going to be physically similar and for the consumers they won’t tell them apart if they’re coated with the same Aqua Blue color. Of course, when the two systems open up the changes from the redesign is much clearer with the eventually needed second Slide Pad underneath the face buttons or vice versa. I know I’m leaving out other equally important improvements such as battery life and comfort. However, I think Nintendo wants to make sure that the redesign isn’t volumetrically different from the original 3DS for profitable reasons and avoiding the shipments of hefty amount of architecturally unequal building blocks like they did for the multiply types of DS systems. Nintendo had a financial loss in the previous year and this is the least risk solution if Nintendo is planning on a redesign this year.

Now why using Aqua Blue for the redesign you might ask. Well I think Nintendo might be staring of using colors as a psychological marketing. Aqua Blue is an iconic color because that’s the introduction color to the Nintendo 3DS that reveals back at E3 2010 and that color choice is available at launch. Revealing the new redesign with the same Aqua Blue color that has already discontinue from the previous 3DS design will also reveal a Launch Color tactic for the future of Nintendo handhelds. Consumers will easily notice which of the systems in store shelves the latest from Nintendo are by viewing the design with the optional Aqua Blue coating.

Re: A Videogame Discussion: Discontinuing Aqua Blue hints a 3DS redesign
May 15th 2012, 11:56 amSupertimbros
I hope we don't need to buy a new 3DS just to have all available features like Nintendo forced us to do when they released the DSi and our DS couldn't use the at the time new DSiWare shop.

Re: A Videogame Discussion: Discontinuing Aqua Blue hints a 3DS redesign
May 17th 2012, 1:01 pmAmufungal
I wonder if it really means anything at all to be perfectly honest

Re: A Videogame Discussion: Discontinuing Aqua Blue hints a 3DS redesign
May 17th 2012, 1:46 pmFox_McCloud
@Sailormoongal Me thinks the same thing
News must be slow like normally before E3