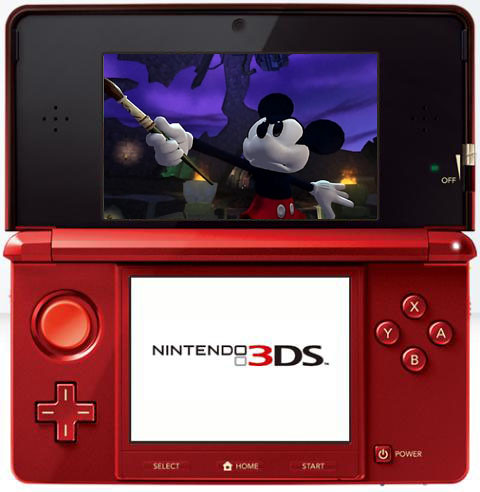 Fans of a certain Disney retro game might be happy to hear about this !

The April 2012 issue of Nintendo Power not only did it just confirmed epic mickey to also going to the 3ds, but it also revealed some details about the game, and the most interesting one is that not only this is a follow-up to the Wii's Epic Mickey, it's also a follow-up to the Sega Genesis game "Castle of Illusion Starring Mickey Mouse" ! details state:

"- side-scrolling, platforming title
- follow-up to Epic Mickey and Castle of Illusion Starring Mickey Mouse
- use stylus to tap item icons
- "paint" (trace) those items into existence
- this includes creating cliffs, cannons, and floating platforms
- the better you trace, the better it is for Mickey
- for example, a well-traced cannon will only hurt enemies, but a sloppy trace job will make a cannon that hurts everyone
- use thinner to erase objects
- characters are sprites
- scrolling parallax backgrounds
- every level in the game is based on an animated Disney adventure
- this includes "Sleeping Beauty" to "Tangled" and many more
- every character that Mickey saves will take up residence in the fortress that Mickey uses as his home base
- due out Fall 2012
- Witch from Snow White is the main villain
- features locations from multiple Disney eras
- Scrooge Mcduck, Minnie and Oswald are in the game"

Well this is certainly interesting ! making a followup to a very well known retro Disney game and it's also interesting on how there are many Disney themed levels this time.

But what about you ? do you love this idea or not ? did these details make you even more interested ?

UPDATE: It looks like the issue also included a screenshot of what the game will also looks like ! however, it is not known if it was replicated or if it's actually a real screenshot of the game

What do you guys and gals think ? is this how the game will really look like or not ?