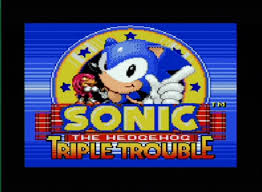 Sonic the Hedgehog: Triple Trouble is an 8-bit speedy adventure exclusively for the Sega Game Gear and no longer worrying about draining six AA batteries at a time thanks to the Nintendo 3DS. Knuckles once again confuse of which side he’s on, took five Chaos Emeralds before Sonic and Tails gets a chance to and give chase through five dangerous Zones while Dr. Robotnik has the last Chaos Emerald and he’s waiting for them in the final Zone known as the Atomic Destroyer. Obtaining the stolen Chaos Emeralds is a different task compare to the first three Sonic games from the Sega Genesis no thanks to Nack the Weasel. Act 1 from all Zones is a traditional speed running paradise. Act 2, while still a normal speed run design, requires exploration in search for the Chaos Emeralds that are trap inside the monitors and a portal opens once 50 or more rings are collected. Either one of the two types of hazardous free Special Stages occur after jumping into the portal, one is a challenge stage to reach the end with a time limit and must really know the physics involving springs of either to just tap the jump button at the right moment or holding down the button even before the bounce. The second special stage is a 3D stage involving riding a biplane, the Tornado, to collect 80 Rings and then a fight against the Weasel. Then in act 3 a boss encounter and remember to collect Rings before the endpoint. If Sonic doesn’t obtain all six Chaos Emeralds after defeating Dr. Robotnik, the bromance (with the Tornado) end credits will not appear and instead an image of the Weasel mocking you. 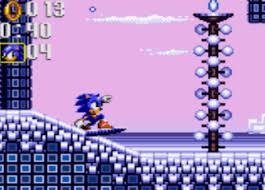 Before starting up a game, pressing down on the slide pad and start button on the title screen reveals a time attack mode that only contains one level, which is good for practice especially testing out the new items. In both the main game and a practice stage, you get to chose either as Sonic or as Tails. Sonic controls the same as his previous adventures except that just going forward nonstop isn’t enough satisfaction when Sonic sluggishly handles a lope-the-lope. While standing, pressing up and then the jump button Sonic will perform a Strike Dash blazing through at top speed and not wasting time trying to gain minimum momentum when continuing pressing forward. The safest way is when pressing down and then the jump button, performing a Super Dash Attack while in his defense curl and continues rolling when pressing forward throughout but the momentum slows down when is just on a flat surface. As for Tails his Super Dash Attack is more durable since his Strike Dash ability is absent, instead replace with his adorable chopper-sounding Heli-Tails where is easy to reach the highest platform, the most important feat for a Sonic game. Using the slide pad to guide Tails in any direction during Hali-Tails until his feet touches the ground/spring or wear off after approximately five seconds. While Tails can’t use his Heli-Tails super move underwater he does have his trusting Sea Fox, a blue submarine with a drill which can be obtain during the early acts of Tidal Plant. Firing torpedoes to open up an alternative path and can even be use to defeat a boss but careful that spikes are super effective against a submarine as well. Tails also has a double jump when using the Hali-Tails technique while in the air.

While springs are the hallmark to the franchise, they are overly use throughout and even occur during a boss fight. Fortunately, all is forgiving thanks to the introduction of new mechanics. During both acts of Sunset Park Sonic/Tails can ride a Spin Coasters after defeating a seat warmer and use the first step of the Super Dash Attack to start coasting away, they can even destroy spikes. There are also new monitors such as Jet Board during both acts of Robotnik Winter Zone, which is similar to the Spin Coaster except without the extra effort. The level designs are simplistic with no need for elemental shields to equip; all you need to worry about are the search for the Chaos Emeralds and spikes with only one occurrence of a peek-a-boo. Every enemy can be defeated when during a defense curl animation and sadly no cuddlesome creatures popping out. Timer counting down while underwater, no problem since the alarming soundtrack is absent and that both acts of Tidal Plant Zone is mostly about floating inside a controllable bubble including the speed of accent after hopping onto a switch. The only halting aspect is during the final Zone involving shifting the camera downward for spike placements when pressing down.

There’s nothing troubling about Sonic the Hedgehog: Triple Trouble. It’s very welcoming that Game Gear titles can also use the Restore Point feature and even with this feature the Special Stages are still challenging, and that’s not all the Virtual Console menu has to offer like the recommended Dot By Dot resolution. An 8-bit adventure that is not a port of the Genesis games is a true illusion to a retro Sonic experience and can still be different without sacrificing the speed. There are flaws such as slowdowns during the consecutive destruction of platforms eating Sonic’s dust and waiting for the screen to scroll to the goal post, however the surprises keeps on coming and an example of that being that dead ends can occur even at the very top of the stage. This game doesn’t deserve a Flicky rating.

Re: Sonic the Hedgehog: Triple Trouble (3DS vc) review
on March 20th 2012, 3:02 amAqua Cherry Blossom
Message reputation : 100% (1 vote)
This is much better than the Snorefest Sonic Chaos lol. Your review score seems a bit high, but other then that your review is perfect.

Re: Sonic the Hedgehog: Triple Trouble (3DS vc) review
on March 20th 2012, 3:37 amMarth
I enjoyed this overall, but I felt there are a few levels that really bring the game down due to questionable design. Still worth buying, though.

Re: Sonic the Hedgehog: Triple Trouble (3DS vc) review
on October 25th 2012, 7:55 pmKokorOtaku
@nintebro I believe it's either this or sonic 2, the others arnt really that good, especially the 2 we were supost to have gotten in July

Re: Sonic the Hedgehog: Triple Trouble (3DS vc) review
on October 25th 2012, 10:52 pmNINTENBRO
Thanks HarmoKnight, but I came upon another $5, so I decided to download CaveStory + instead. Which is fine by me, because CaveStory is awesome when played in widescreen 3D.

Re: Sonic the Hedgehog: Triple Trouble (3DS vc) review
on June 3rd 2016, 6:08 pmGeekyGamerJack
This game is pretty fun, and I like that you can choose to play as either Sonic or Tails. Personally, I prefer to play as everyone's favourite 8-year-old kitsune tech wiz.

Re: Sonic the Hedgehog: Triple Trouble (3DS vc) review
Sponsored content
Permissions in this forum:
You cannot reply to topics in this forum