“Golfball out of bound”

Shin’en Multimedia is been known for their enjoyable “eye candy” downloadable treats on the Wii Shop Channel such as Fast Racing League. Fun! Fun! Minigolf TOUCH! Is their Nintendo eShop debut and it’s a remake of a Wiiware game of the same name without the TOUCH! This remake contains triple the amount of minigolf courses which is technically true, touch screen controls, and replacing the family friendly local multiplayer with a challenging single player that is easy to come back to. 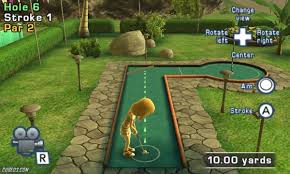 Starting out the game with only one cup unlocked and that is the America Cup. Introducing the layout of the mingolf course on the top screen while the touch screen reminds you of what cup you’re in, what number is the course, and the number of strokes to receive a Par. A Par is another way of saying that you get zero points after completing the course. Remember that this is still golf and in every rule of golf is to get the fewest amounts of strokes as possible. Completing a course with a stroke less than a Par is call a Birdy, two strokes fewer is an Eagle, three strokes fewer is an Albatross. Completing the course with the unfortunate one stroke extra than a Par is call a bogey, two strokes more is a double bogey, three strokes more is a triple bogey and even if the ball is not in the hole you will automatically move on to the next course. Keep that in mind that the amount to get a Par is different depending of what course you’re in. After finishing all nine courses, rewards you with cash (fewer strokes on a course equals more riches) and a medal if your handicap score is a negative number when taking all your strokes performance and subtracting with the sum of all Par scores. Using cash to shop for more cups, mundane Trick Shot courses, easy to purchase playable Mii, different clubs to add glitter effects, and 8bit retro SoundFX. 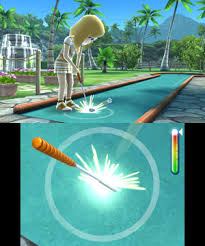 There are three steps to perform a stroke when using the slide pad. Moving the slide pad left or right to change the direction and press A for confirmation, then a gauge appears on the top left corner of the touch screen that automatically increases and decreases the stroke power and pressing A at the right strength. Finally, on the center of the touch screen is a yellow dot that is moving back and forth, indicating the golf ball’s behavior. Pressing A when the yellow dot is on center of the ball will travel straight while pressing A when the yellow dot is on the right inches away from the ball will travel curving to the right. The other control option is the TOUCH! Using the touch screen fortunately only takes two steps. Using the stylus to slide between the dotted lines to direct the ball, then tap the ball and pull the club to choose the stroke power manually while simultaneously displaying the uncontrollable yellow dot and release the stylus when ready.

There is another rule to keep in mind, at least for this golfing experience, is the “out of bound" rule. One way of getting “out of bound” is when the ball lands outside of the course and that does happen. The second way, and commonly the frustrating way, is when the ball doesn’t land on the white-border area of the course and the ball will place right back in the starting position and still be count as a stroke. This does add strategy to reach the area by choosing whether to curve the ball, ricochet from the course wall, and the amount of stroke power that the game only ask of you to reach to the end of the course. Don’t worry if the ball stops between the white-border area and the course's border, it will still count as being inside the area. Some courses don’t have the hole inside the white-border area because it only ask of you to choose the correct stroke power and it gets more complicating when playing the Super Cups. If you get tired of hearing “out of bound,” on the lower right corner of the touch screen is a “Abort Stroke” option and tapping it when knowing you’re ball won’t reach the area when is clear that the ball is rolling back towards you and don’t want to wait for the dreaded announcer. 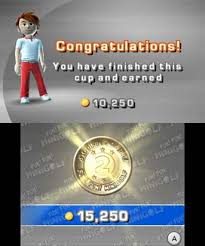 The other two Cups, Asia and Europe, are the same course designs from the Wiiware game. There are also Pro Cups that features mirror mode for all the first 27 courses and scattering coins on the playfield to gain extra cash. Super Cups are the same course designs as the normal Cups with an extra obstacle and still featuring the scattering coins. These course designs are bland, doesn’t feature any windmills, and playing in different region only adds a change of scenery. The skills of decreasing your stroke performance is what will keeps you coming back and the simplicity of the course designs really helps. Playing in the Cups only worry about the number of strokes, while playing in the Pro and Super Cups is where it gets interesting. Keeping track of the best cash score and increasing by getting fewer strokes and obtain large amounts of scattering coins as possible. Getting all the coins in a hole in one is possible and very satisfaction if you have the determination.

Fun! Fun! Minigolf TOUCH! Is a challenging and rewarding score attack game. Going back to achieve a gold medal and looking at the lushness of the scenery background even when the stereoscopic 3D is a triple bogey, still makes things relaxing. The touch controls works well with adding dedication from the tropical soundtrack, a favorable Shin’en tradition. There’s no online leaderboard, rarely of game crashes during loading, and even with a shop the content is barely there. Fortunately, the game does what all Shin’en games does, delivering the Fun!

Re: Fun! Fun! Minigolf TOUCH!
on March 12th 2012, 6:25 pmAmufungal
I just downloaded this game and it is much better than the Wiiware game

Otaku wrote:Does this game use the gyro motion sensors for anything?

There's no gyro controls. The game is not called Fun! Fun! Minigolf GYRO!