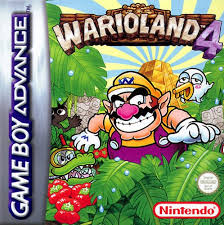 That is exactly what Wario is doing, he’s working it. Working his way to find treasures, that someone else found but not obtain yet. He wastes no time as he drives all night with his sweet purple ride, suprising a suspicious black cat with its heavy-duty headlights. The Golden Pyramid awaits for him not just treasure, but the wackiness that will engulf him, even literally, and the insane boss confrontation that he no doubt feels right at home in. Wario Land 4 is a game that everyone will feel right at home.

As Wario enters the Golden Pyramid with the treasure room being block, He must first start by entering the Entry Passage that acts as a tutorial, relearning his anti-Mario moves of strength versus flexibility. Progressing further of the passage opens up the Mini-Game Shop, Item Shop, and a boss door. The Mini-Game Shop, using your obtain different value coins that he collects throughout the levels to purchase a play session in exchange for medals that are use in the Item Shop to exchange for wacky weaponry that are then use to damage the boss before the battle actually starts. Then 4 more passage open up, replacing a tutorial level with four unique platforming ones, and is best to start with the easiest difficulty passage by going counter-clockwise. Finally, Wario enters the Golden Passage, which the name speaks for its self.

The level designs are the real treasures in this game. Each level is like a theme park that introduces new puzzle mechanics each time. The goals are the same throughout his 2D side-scrolling adventure, each level Wario must find 4 golden treasure chests that contains jewel fragments that acts as a key to the boss room. He also must obtain a ghostly key known as Keyzer, which opens up a door to the next level in the passage. These items can be obtain by traditionally progress through the level, accessing areas that Wario won’t normally have access to with just his strengths alone, and during his escape route. Some enemies, the ones that are design as carny minions, and elemental spills will help him out on unreachable areas by transforming him with a new ability unharmed; unlike with Mario’s transformations Wario’s method is to endure his allergenic side effects. Activating a switch from a frog statue starts a timer and an escape route, backtracking previous areas with alternate path or escaping by going through a entirely new area, and he must reach back to the start of the level and warp back to the Golden Pyramid map along with his obtain items and coins. 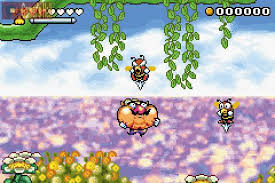 At the end of each passage is where the wackiness comes into play. The Mini-Game Shop contains three never-ending WarioWare games. Unfortunately, all the passage features the same exact mini-games. Playing them to gain a cheap shot at a carny boss with a one-note joke only works once and it isn’t mandatory as it’s still possible to defeat the boss within the time limit, at least in normal mode, and still be able to get all the reward bonuses with satisfaction. However, it is worth to spend on one of the wacky weaponry for the final boss, which leads to a prestigious act of the story.

Wario Land 4 is a terrific platformer with its own definition of accomplishment and wonderment throughout. Optional treasure chest that contains a CD from each level and reveals that obviousness do not exist. The music is like listening to scenery art as these levels contain exploratory fun and then replace with memorable music that reminds you that you're in a videogame and you need to act fast. The replayability comes in many forms such as going back to a level for the remanding item progressions, high scores, and hard mode where all the time limit during the escape route and bosses are reduce to half. The game looks great on the Nintendo 3DS especially when not using the Game Boy Micro resolution, ending this review on a wacky note that Wario can jump rope like a pro.

Re: Wario Land 4
on February 23rd 2012, 2:28 pmTowafan7
I always wanted to try some of these first party handheld titles, but eye issues made me decide against getting a handheld.

Re: Wario Land 4
on February 23rd 2012, 2:59 pmMarth
I've been playing this game on and off for years, but only this CHristmas did I actually beat it. I've gotta say, it's a lot shorter than I remember, but it's still well-built and has enough replay value to make up for that.

Have you never owned a handheld before? You could pick up a GameBoy player for GameCube/Wii and track down cartridges if you really wanted to, though that could get expensive.

Re: Wario Land 4
on February 25th 2012, 6:02 pmSkywardL
Thanks to Wario Land 4 I can't wait to get my hands on the first Wario Land game whenever North America decides to release it on the Nintendo eShop.