Alright time for another Mario Kart game with the expectation of stereoscopic 3D and new tracks. Here we go with the familiarities. Wait a second, there’s customizable karts and attachable gliders? Did Peach just blow kiss me? Why is a boulder that just knocks me over so shiny? I drive into water and I don’t need Lakitu anymore? What, there’s two Lakitus now? What is going on? I’ll tell you what’s going on. This is Mario Kart 7. 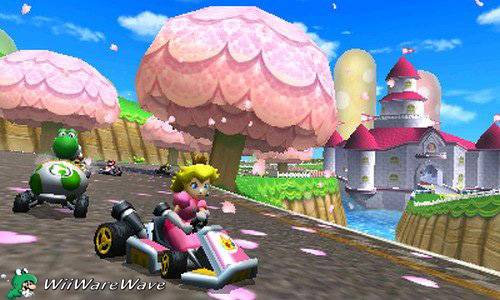 The gameplay is all about trying to win first place. While not necessary important when playing multiplayer with the focus of guarantee fun, being first place in Grind Prix unlocks characters and bragging rights. The steps to get the highest probability of being victorious is by luck with the Item Box, skill of mastering drifts and timely jumps, discovering shortcuts, and collecting coins to increase your top speed while also helps you to unlock kart parts. However, these steps won’t work unless you’re not using the assemble kart that is efficient to your liking.

The arena stages for Balloon Battle is all about obtaining the Item Box to try to take down your opponent’s balloon and avoiding their attacks while Coin Runners is all about collecting scatter coins while making sure you don’t lose your own collection from an attack. The problem with these modes is that these gaming sessions are more fun during the actually races and more determine minus the balloons. 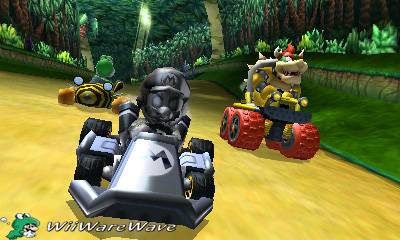 The presentation is a sight to be hold as well with the inclusion of first-person. Pressing up on the d-pad during gameplay will active the first-person view with gyro sensor on default so make sure to switch it off in settings, which is locate on your Mii icon from the Mario Kart Channel. While is possible to play with gyro sensor especially when doing drifts, it isn’t worthwhile as it requires the 3D Slider to be turn off and the controls are a miss opportunity as it does not use for gliding when you want to descent or ascent. When gyro sensor is disable, being in first-person view not only plays the same way it also defines a true kart racing experience. Noticing the vibration of your personalize kart, the sense of speed with twinkling rings rushing through you when collecting coins or nailing a jump, and realizing how close you are to the action are all demonstrations of exactly why all the playable Mushroom Kingdom residents (and Miis) are all so enthusiastic to every detail while racing. The only drawback is dealing with blind spots and if you want to be cautious to your surroundings you can always go back to normal view by pressing down on the d-pad.

There are flaws, or referring as potholes. Example of that is when playing Waluigi Pinball will remind you that Waluigi did in fact previously been a selectable character and surprisingly there are many characters from previous installments that are unavailable. Maka Wuhu is the second Wuhu Island course that feels unfinished, as there’s an infamous ultra shortcut and that Lakitu just didn’t know any better. They don’t ruin the experience. However, just like potholes in real life, they’re noticeable. 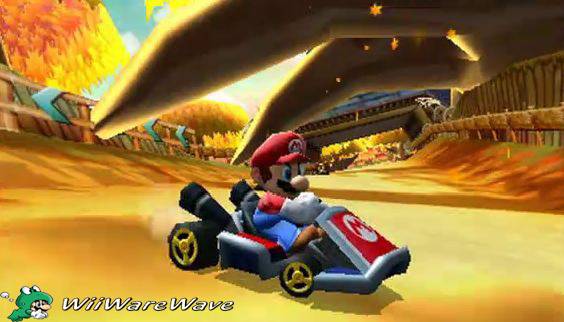 Mario Kart 7 is a game that delivers the presentation and the execution of a kart racing experience. The music and graphics from the new 16 tracks brings out the nostalgic vibe as well as the inclusion of 16 retro once. The online works with rare occasions of connection lost and becoming more social by scheduling Communities. Your character’s reaction reflects your emotions while racing. The additions of gliding and underwater segments, even if it's mostly mandatory, gives a sense of freedom. Nintendo and Retro Studios successfully dodge the dreaded blue shell. 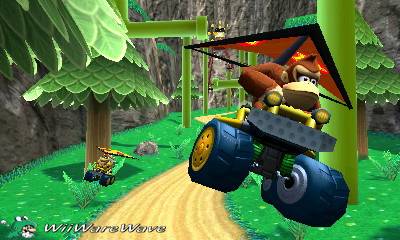 
This Review can Also be read here.

Re: Review: Mario Kart 7 (3DS Retail)
+
February 18th 2012, 12:57 pmMarioman18
I have this game and love playing in the online communities the online is much better this time around except for the dreaded Maka Wuhu glitch good review SkywardL

One question where are the pics?

Re: Review: Mario Kart 7 (3DS Retail)
+
February 19th 2012, 7:06 pmSneaker
I enjoy this game but I hate certain aspects. Especially that you can be hit by red shells and stuff while in mid air. Double Dash is still the absolute best Mario Kart game in my opinion. If only it had online.

Re: Review: Mario Kart 7 (3DS Retail)
+
February 19th 2012, 11:23 pmMarth
Honestly, this is probably my least favorite game in the Mario Kart series. I wasn't expecting innovation or really much of anything at all, but it still managed to under-perform. Still got tree starts and hunted down the parts, but I did so begrudgingly.

Re: Review: Mario Kart 7 (3DS Retail)
+
May 15th 2012, 2:12 pmSkywardL
Thanks to the first Mario Kart 7 update from the Nintendo eShop, Maka Wuhu is finally an awesome course to play online.