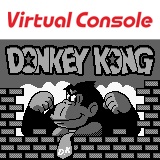 I remember receiving a Game Boy Color in my youth and felt uninspiring with it and being too busy enjoying my Nintendo 64 anyway, then I realized that few years later that was because they were shovelware plus Pokemon.
Thanks to the Nintendo eShop, I can finally experience what I was missing with the original Game Boy and my first purchase was Donkey Kong '94. Once I accidentally letting Mario to perform a back flip, it was my most astonishing viewing experience and I can’t believe that It take me this long to notice that the little device is more than just a Pokemon system.

Mario’s athletic abilities are what really stand out from Donkey Kong ’94. He doesn’t need a 64 bit posture to obtain the moves such as handstand, high jump, and spinning on a rope. I’m not the only one who is fascinate by his skills, there’s a theatrical presentation with live audience witnessing Mario’s acrobatics during the game’s title screen. Even The game demonstrates the fascination with cutscene interludes that show specific ability that will be helpful to progress further. Since this is a Virtual Console game after all, it will be even more helpful by selecting Manual on the home screen and learn to do a back flip a head of time.

The story is identical to the first Donkey Kong game on the arcade. Donkey Kong kidnaps Pauline and Mario must save her from his banana stinky breath. After a sense of déjà vu of completing the first four stages, Donkey Kong isn’t giving up without a fight and kidnaps Pauline again while Mario pursuit towards more complex stages which features building bridges and using enemies as accessible platforms. In order to complete these complex stages, Mario must obtain a key that will open a lock door that leads to the next stage. Once Mario obtains the key however, he can no longer perform his athletic abilities. Unless throwing the obtain key, a normal jump is the only Mario ability in which transforms a stage from an acrobatic playground into a delicate platformer. The Donkey Kong segments are more tradition to the original arcade than the stages.

Obtaining the Key, any other held object,acts as a Super Mushroom. Receiving a hit from an enemy or a projectile will stun Mario and let go of the key and he must quickly obtain it back before it vanishes and must go back to obtain the key again. Unfortunately, this tactic won’t work when falling from a deadly height as Mario instantly let’s go of it and then lands head first. The key also acts as a weapon to toss at enemies.

Mario won’t know what type of stage he's in unless he listens to the catchy tunes. From brain teasing levels to aggressive platforming, these stages can be determine by music. The fade background lets you know what world Mario is currently in and while in detail, they’re no match for the richness of the level design.

Donkey Kong ’94 is an excellent game that proves that handheld experiences will obtain the same fun, challenge, and rewarding accomplishment as a console game. Mario’s athletic abilities will hook you in from the beginning and will slowly departure the sense of freedom as Mario progress further to a real meat of the game. Take a bow Mario.

9/10 - Sometimes there's a flaw in the hit detection but other then that this is a must buy.

Re: Donkey Kong '94
Thu 16 Feb - 7:13Pyrafan7
It's when I hear about fun games like this, that I wish I had good enough eyesight to play handhelds on a regular basis.

This is a very good review, welcome to the team SkywardL.

Re: Donkey Kong '94
Thu 16 Feb - 9:46Jnes5
Huh, that's interesting, a game boy mario game that has the acrobatic moves from a nintendo 64 game... this game looks very good from what I've seen from it so far !

And good review SkywardL ! I'm interested to see what you can review for this website since you have a 3DS !

Re: Donkey Kong '94
Thu 16 Feb - 18:08Marth
I prefer Mario VS Donkey Kong on the GBA, but I still give this game major credit for setting up the building blocks. I found it cool that the original four levels were featured at the beginning, tricking you into thinking it was just a basic port, then seeing "1-1" and a world map.

Re: Donkey Kong '94
Fri 17 Feb - 8:11Akatsuki
I never played this game, but this sounds much better than Donkey Kong Arcade.

Re: Donkey Kong '94
Fri 17 Feb - 20:43Staroceancrazy
There's a 3DS VC review now!
Nice review this game might be my next download

Re: Donkey Kong '94
Sun 30 Dec - 11:39NINTENBRO
Yes, it is Kushina! I still haven't finished this game yet,, though. I believe I'm stuck somewhere in the 5th or 6th world, at the moment. Some of the stages really make you think, but not to the point where you're beginning to tire of it.

Re: Donkey Kong '94
Wed 3 Jul - 1:42Tasuki
Just a heads up this great game is available from the NA Club Nintendo for 100 coins. If you have the coins to spare and have been on the fence with this game now will be a great time to get it.

Great review btw. This was one of my favorite games growing up I remember playing it on the GB as well as the Super GB adapter. Kinda sucks that they couldn't put the in SGB enhancements in the VC version but its a great game. Can't wait to play it again on the 3DS VC.

Re: Donkey Kong '94
Sat 20 Jul - 7:10Clαππαd
This game brings back good memories of my childhood it is worth the price and is very fun.

Re: Donkey Kong '94
Sat 4 Jun - 11:02OrionJZed
I agree with the review score. This game is brilliant and deserves to be in every 3DS owner's VC library.