Luigi won a mansion in a contest !... but he never entered a contest, and the worst part is that the mansion is haunted with ghosts ! and mario is trapped inside ! so with the help of Professor E. Gadd, luigi has to fight all of the ghosts with E. Gadd's invention, the Poltergust 3000 !

Story
Let me tell you this first, this game is very different from your typical mario game. The story mostly is told within cutscenes or discussions, but it also kind of mixes with the gameplay in some parts, and it's a very good variety when progressing, and even though the story is supposed to be family friendly... there are some moments where the game gets a little... let's say, uncomfortable... but overall, it's a nice and kid-friendly story with a few somewhat uncomfortable moments.

Gameplay
Luigi's Mansion is an action-adventure game where the main objective of the game is to capture all of the "Portrait" ghosts in the mansion who have escaped from Professor E. Gadd's paintings by using his inventions in which include a vacuum cleaner called the Poltergust 3000 and the Game Boy Horror. The game always takes place in the mansion but each room has a different variety of ghosts, for example most of them have one of the Portrait ghosts, some of them have just regular ghosts, and if you capture them all, you will lit up the place and get a key (or in some cases, a treasure chest full of money) which can unlock a door to the next room allowing you to proceed to the game.

And about how to capture the ghosts is like this, first you have to stun them with your flashlight, making them reveal their heart and then, quickly, suck them up with your vacuum, but then the ghost will try to escape and in order to not let it escape and catch it, you have to reduce their HP (health points) by "reeling" them in like in a fishing game, keep in mind that you also have an HP system and if you're doing it wrong, you will lose health, and not to mention that the ghosts have a different way of attacking you in order to take down your health. However, while you can do that with the normal ghosts, the Portrait ghost is another story, you can't capture them at first, first you have to know some clues or look at a certain pattern or do a certain thing in order to make them reveal their hearts, but know that some of them might be tricky to do but not that much, and they also have larger health so it's longer and requires you to know how to maintain an enemy longer, there are also boss fights included as well, where each of them have another way of how to capture them (in fact, they even have their own arena !) and they are more trickier to capture. As for how to look for clues, the Game Boy Horror is a portable device that allows Luigi to investigate items in the mansion in a first-person view to find out what they are and can help luigi look for clues, but it also can show you the map of the mansion, an inventory screen where it shows you what items and Portrait ghosts you have and it also lets Luigi contact Professor E. Gadd anytime.

But there are other thing you can do in the mansion, you can also gather a lot of money by checking the furniture or objects around the room, either light or dark, in which it will affect the ending depending on how much you've gathered, and there are also some secrets to discover in the game to not only finding more money, but for other stuff as well in which I will mention later on. But also, in a certain part of the game, you will have to catch boos in order to progress the game, where you have to find them in the rooms that are lit and then look at the game boy horror's little light to indicate if a Boo is in the room and how near Luigi is to it in order to investigate, but capturing can be tedious and long, not because they're hard, but because they are always quick to escape to another room, making you to go to the other room in order to capture them, and it goes over this process over and over again... and another thing to mention is that in a certain part of the game, you are going to use medallions which allow him to expel fire, water, or ice from the vacuum in order to capture certain ghosts or to progress through the game.

The game is fun for the most part, but the whole part of capturing the boos is very tedious to do, and not to mention that there are some secrets that are annoying to do, but as it is, the gameplay is good but it could've been a lot better.

Graphics
For a game that was released during the gamecube's early days, it looks impressive ! the lightning specially is really good !... sometimes... and the graphics itself doesn't look to bad either, since it's style looks more artistic than real, the character models look really good too, the game overall looks good and for good reasons too ! since this game was actually just a technical demo designed to show off the graphical capabilities of the GameCube and then Nintendo decided to make it into a full game.

Music and Sound
The soundtrack focuses heavily on one song, with the exception of some dark rooms, the boss fights, and a few other special occasions, this certain song will always play wherever you go, from composed with an orchestra to luigis whistling, and the song is not that bad, but you will just want to hear another song, and thankfully the game does that, and the other songs are good too ! some of them are fun and quirky and some of them sound, let's say, scary.

The sounds are very good ! both realistically and fantasy wise, they sound just like how they should be, making the experience very comfortable ! as for the voice acting, again, just like in any other nintendo game, the characters just grumble, but again they don't sound too bad.

Presentation
One of the thing that I like about the game is how they represent the Portrait ghosts, since each of them have a different liking and they also have a mind on their own, giving them more of a personality and one of the good things is that said liking are related to the clues that you need to find in order to stun them, even though they don't show a lot of character, there was still some space for them in order to show, and even the boos that you need to capture have very silly names ! like TaBoo, ShamBoo, TurBoo and even GameBoo Advance ! so it's nice to see that this ghosts have some personality rather than being generic.

As for the replayability, one thing that I want to mention is that the game is short ! since there are only 4 segments and 2 of them are really short ! BUT there's decent content included in the game that they will keep you busy for some time ! there's the secrets that you can find like blue ghosts, gold mice, etc., but they are not collectibles so you don't unlock anything once you found and got them all... but there's also a mode you can unlock by completing the game called the hidden mansion mode where the game gets a little more harder, and as I've said before, the amount of money you collect can affect the ending, so you'll be busy looking to get a lot of money in this game !

Overall
The game is good and fun as well, but some flaws really hurt the game, but not by much ! so if you hate short games, give this one a rent and see if the content is good enough to warrant a buy, but if you like a fresh new take on a mario game and always wanted to play as luigi, then go ahead and buy this ! and as for me this game gets... 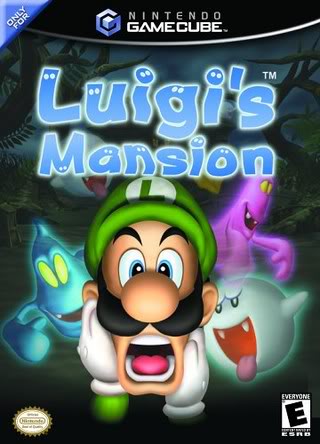 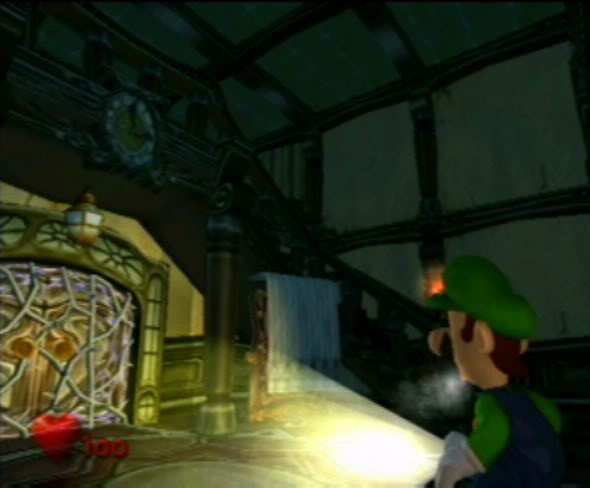 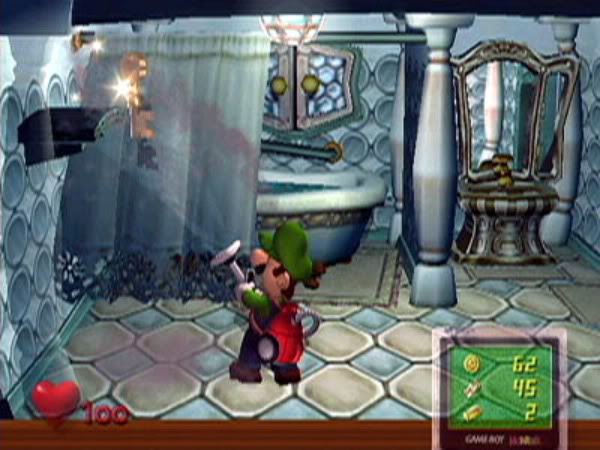 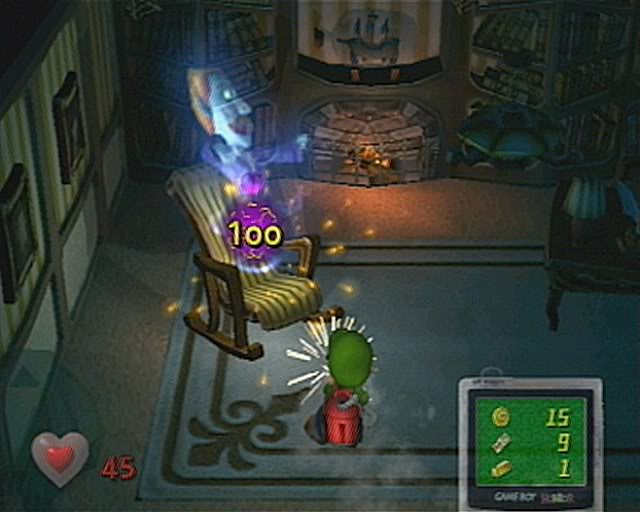 Re: Luigi's Mansion
on October 31st 2011, 11:47 amAkatsuki
I love the ingenuous gameplay and creepy encounters you face in the game! Nice Halloween review Jnes5

What I had the most problems with, is trying to hit the ghost with a ray of light. It's sometimes a bit difficult to see if they are in front of you or behind you. But nothing that spoils the fun.

Re: Luigi's Mansion
on November 1st 2011, 12:16 pmMechaFreiza
Booyaa fantastic choice for your review of the week Jnes5!

Re: Luigi's Mansion
on November 1st 2011, 1:51 pmHimawari Chan
Luigi is so funny when he gets scared in this game

Re: Luigi's Mansion
on November 3rd 2011, 2:51 pmMegatron2000
I think Luigi should star in more Nintendo games |D
I love Jnes5's reviewing style. They're so professional and easy to read |D

Re: Luigi's Mansion
on November 3rd 2011, 6:18 pmIchigo Kurosaki
This deserves a 9 at least but your review itself is great!

Re: Luigi's Mansion
on November 7th 2011, 12:07 amcaptainamerica
You are without a doubt in my mind the greatest reviewer in your town, and certainly on WiiWareWave......!

Re: Luigi's Mansion
on November 8th 2011, 10:30 pmMouser
@Kingrex32 think what Ghostbusters would have been like in Miyamoto's hands. That's what this game is like and you can find this Super Luigi spookfest for around $5.00 in the United States and Mexico at Gamestop.

Re: Luigi's Mansion
on November 9th 2011, 1:44 pmItsame
Luigi is the most under appreciated character in any video game ever created, great review

Re: Luigi's Mansion
on November 19th 2011, 5:57 pmNINTENBRO
The future sequel for this looks really nice for a handheld game. Maybe it'll be longer, since it's not built upon a technical demo.

Re: Luigi's Mansion
on January 22nd 2012, 12:58 amMarth
Reading this review, I regret selling this game towards a PS2 back in the day. I hope this comes to the WiiU VC around release.

I still wish Luigi got to see the limelight a bit more.
Re: Luigi's Mansion
Sponsored content
Permissions in this forum:
You cannot reply to topics in this forum