Long ago, an evil samurai warlord was banished the first time, an era of peace and tranquility descended upon the empire for more than 300 years, then one day, something changed, terrible storms began to brew over the mountain on the distant horizon. floods and earthquakes began to appear in the flatlands, the truth was that the evil samurai warlord had returned, the Ninja Master knew none of this yet... though he knew that something must be done and made it his unbreakable oath. He sent his best ninja to discover the truth of the storms, but no word returned from the ninja. One by one, he sent another, but again and again... nothing. Until he was left with only two left, the Ninja Master was hesitant to send his last two, but he knew the fate of the world would lay in their hands.

Story
While the game has a simple storyline with a few twists that makes it a little different from other games, it's not that bad, there are a few cool moments and sometimes the game throws in some humor in it as well, and not to mention that the game is mainly meant for kids, and as it is, it's a really cool story for a kids game and there isn't any mature moment in it, in fact, the game is kind of family friendly overall, and it does a good job at it and it can also appeal a lot of people too.

Gameplay
Mini Ninjas plays like an action-adventure game but with stealth gameplay thrown in there as well, and there are 6 characters to play as, but first you have to unlock the 4 of them first individually later in the game so you're forced to begin with 2 characters. Each of the characters have their own way of fighting, for example the main character, Hiro, is the only ninja that can use magic and can possess animals too, then there's Futo who while he is somewhat slow, he can take on large enemies with his giant hammer, and then there's Shun, who can attack with a bow and he can be helpful by attacking enemies from a distance, one good thing about the game is that you can change characters anytime and you can also play through all of the levels with just one character of your preference.

The main objective of the game is is simply going from point A to point B while attacking a few to a group of enemies and also do a few other stuff like finding ingredients so that you can make items, and also find Kuji Shrines in which they can give Hiro a new magic power, but one annoying thing anout this is that you can't pick up the magic right away once you've found the shrine, you will need a flower in order for the shrine to dive it to you, but these flowers are very hard to find and there's only one of them in a level, but besides that, you can also free little animals trapped in cages and you can also, as I've stated before, stealth your way into the game, but there is a giant problem that's plaguing in the game and it is the fact that you can level up with exp. points, and in order to gain exp. points is to defeat a certain amount of enemies and freeing animals and this completely makes the whole stealth mechanic a waste of resources and time, since while you can still take out one enemy at a time in stealth, you can't simply sneak past them and taking them out one by one will take a lot of skill and time to do it, and to be honest, it's not worth it, but what makes matters worse is that there are sections in the game where you must fight a lot of enemies, so you need to be leveled up for it and let's not forget about the bosses too... all of this problems that I've mentioned just makes this game messed up...

The combat in this game consists with a variety of enemies, but some of them are annoying, sometimes making the combat of the game feel a little tedious and uncomfortable to go through, but thanks to a few gameplay mechanics like Hiro's magic and a few moves like the skill attack, which has a different way of attacking (like for example, Hiro's skill attack is like a "bullet time" slowdown where you point the cursor at a few enemies and then instantly defeat them once the slowdown is over), it can lift up the tediousness but not by much. Now while I'm talking about the negative asoects of the game, there are some good concepts in there as well, for example most levels are not that linear since there are branching paths you can take, be it another path or a secret passage way of a fortress, but again, the leveling up mechanic makes this concept useless.

And it doesn't help that the game can get boring later on, sure you can do a lot of stuff like fishing and riding on your hat-boat to some really cool segments, but it doesn't make the game a little less boring. with these problems and more, it just makes this game mediocre, boring and tedious to play, while it does have some moments, they don't do much overall...

Music and Sound
The soundtrack of this game is very nice, consisting of japanese instruments, the music does set a great mood in a lot of segments and while they're not memorable, it's very nice to listen to it.

The sounds are pretty cool too, some of them sound decent, but some of them sound very good too, like the sword slashing and the beating up sound effects, they're very comfortable in all honesty and as for the voice acting, the main characters don't talk and the enemies just grumble, but some of the characters, while they do sound cartoonish, they do a good job at it ! and with a nice variety of languages too as well !

Presentation
While there is a total of 6 characters to choose from, strangely enough, there is no multiplayer in the game ! which it is a shame too, since the game could've been better with it despite the flaws the game has included.

The game is set in feudal Japan, where the environments and buildings for the game are based on some of Japan's most beautiful and well-known landscapes and structures such as rice fields, snowy mountain ranges, lush forests and canyon rivers, and it has some fantasy thrown into the whole presentation as well, the game does a great job at making it look beautifull and cartoonish at the same time, and not to mention that the way they represent the ninjas is very cool too, since while they can't talk, you can feel that each of them have a charming personality in them, and the fact that they are ninjas as well, the game does a good job on how a ninja is and behaves overall, while also doing new twists into it without ruining the ninja image.

And as for the replayability, there is a lot of stuff to do in it ! you have to collect Jizo Statues, discover all of the hidden Kuji Shrines, free all the animal cages, finding all of the ingredients for making items and much much more ! but one big problem is that you won't unlock anything if you complete the game in 100%, there is a few extra videos in the extra sections showcasing how the 6 characters were raised as ninjas, and while they're pretty charming and cool to watch them all, there really isn't another cool thing to unlock since there aren't any.

Overall
This game is decent, while the game has a few good concepts, there is a lot of flaws included in it that makes this game mediocre, boring and tedious to play, while it might entertain families and such, they're not going to hold this game much longer thanks to it's flaws it includes, so if you think that the concept sound cool and that the graphics, soundtack, and the overall presentation sound appealing to you or you're maybe a family man and you want a game that will entertain your children or your family, then give this game a rent since you can do much better with other games, but as for everyone else, you can skip this game since you're not missing that much, and as for me, this game gets... 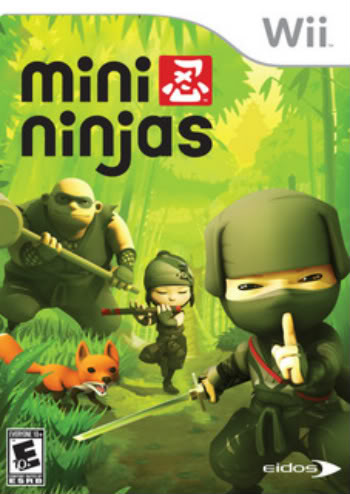 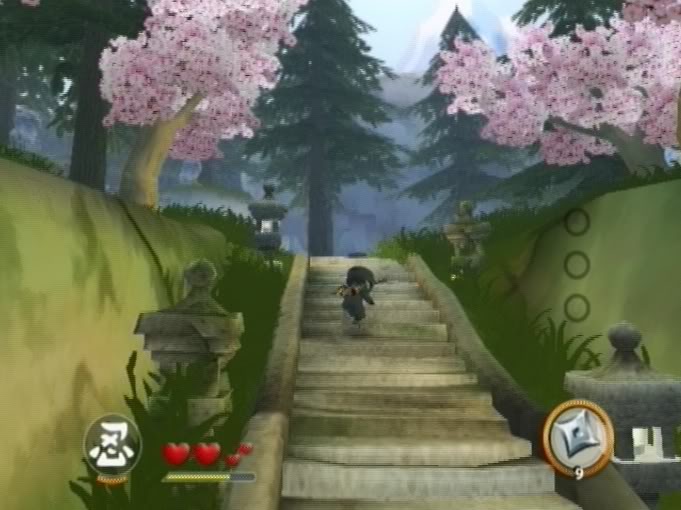 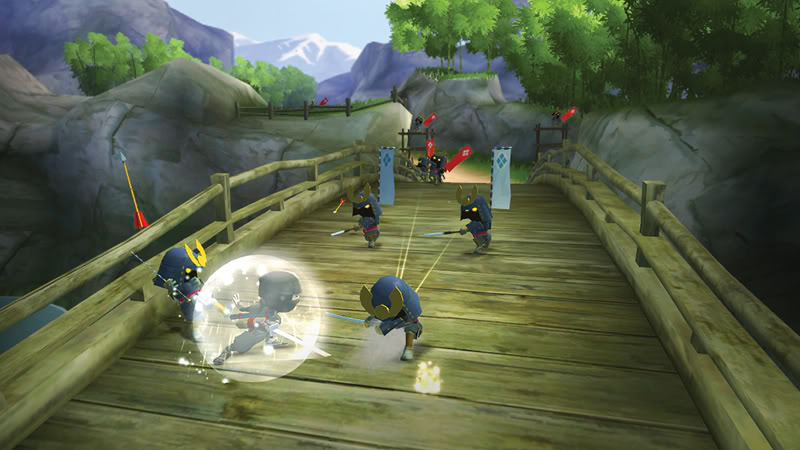 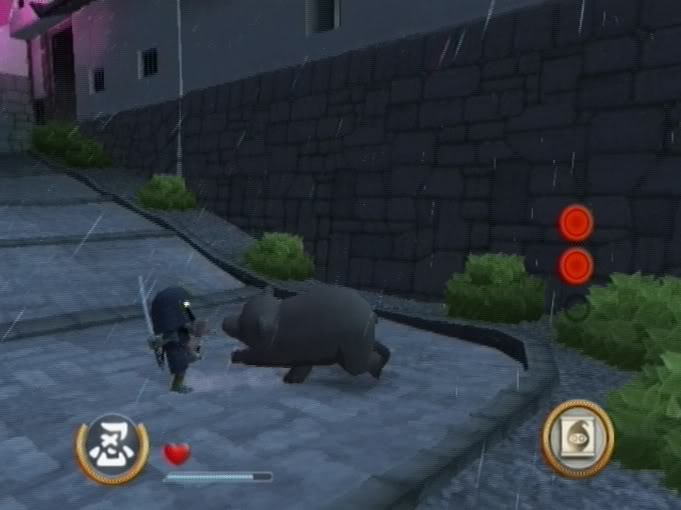 Re: Review: Mini Ninjas (Wii Retail)
October 3rd 2011, 1:46 pmRWBY Yellow = Yang
This is a typical wii action game that is just boring and uninspiring its gameplay is decent but it fails everywhere else

Re: Review: Mini Ninjas (Wii Retail)
October 3rd 2011, 3:58 pmPhoenixSage
It figures a game that is multi-plat would be a mediocre game for the Wii port D:

Re: Review: Mini Ninjas (Wii Retail)
October 4th 2011, 12:46 amClunkermobile
Why am I never wrong at guessing which games will be boring on the Wii?

Re: Review: Mini Ninjas (Wii Retail)
October 4th 2011, 11:39 amKilleryoshii
Meh. I wouldn't have bought this even if it got a good review since I don't like kiddie games like this "Kirby notwithstanding"

Re: Review: Mini Ninjas (Wii Retail)
October 5th 2011, 1:09 pmZatchbell
Am I the only person here who actually likes this game